Charlie Ross 1931-2021
With the kind permission of Seafield and Strathspey Estates ,this bench was commissioned by Carrbridge and Vicinity Community Council and is on the site the Woodsman’s Caravan or Carabhan a’ Choillteir.

The bench is made from Scottish oak, supplied by Andrew McInnes, expertly crafted by Douglas Edwards and funded by the community. The photograph of the caravan in the snow was taken in February 2009 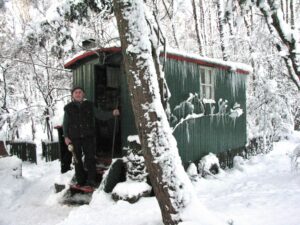 Charlie worked in the forest all of his life apart from two years national service spent in Malaysia. His Father gifted the caravan to him when he was a young man.
He towed it from forest to forest, living in it while working there.
The way that timber was handled changed and rather than milling timber on site they started to move it to sawmills.
Although Charlie carried on working locally in the forests he sited his caravan next to the sawmill in Carrbridge in 1964 and it became his home.
A Christmas Party with  Charlie was a cosy experience but a Woodsman’s Caravan is a bit like a Tardis 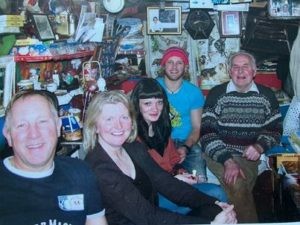 He happily lived there with all his worldly possessions for over 50 years until unable to do so. He moved into care and sadly passed on Christmas Day 2021.
He was a quiet man but he and his caravan were part of the community and he loved a chat with anyone who came past and stopped to say hello .

The Caravan was gifted to the Highland Folk Museum and can be found in the Pinewoods on the way to the old township. There was some damage by Storm Corrie and the restoration will continue.