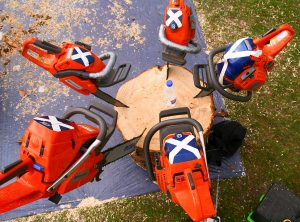 Carrbridge is a village of less than 800 residents with immense community spirit and pride.

Carve Carrbridge is now in it’s 18th year and in 2019 we counted over 60 volunteers who make the event the success it has become –  year on year.

Throughout the year a core group of volunteers coordinate the event so here is a brief introduction to the 2022 team.

Gavin has led the Carve team since 2006 drawing on his skills as a Project manager delivering infrastructure projects for an international construction company.  He is chair of the community charity Carr-Bridge Ahead  which invests the proceeds from the event to local good causes.

He is often off on his bike, skis, kayak in Scotland, France, Norway, USA, Alaska etc, etc………………….(you get the picture).  In 2009 Gavin completed Kayak Caledonia an 800+ km trip by sea kayak to circumnavigate the North of Scotland, raising funds for Macmillan and Childline

“Since first getting involved with the Carve two things have always really impressed me. Firstly the talent and creativity of the carvers and also the incredible number of local volunteers and businesses, who year on year, give their time and support to make the event possible.  It is a real credit to this community and a privilege to be able to play a part in that.”

On retiring to Carrbridge from a career working with young people and community groups in and around Edinburgh, Doug took on the role of Carvers/Arena Coordinator in 2014. Doug is an outdoor  enthusiast and is often found climbing, biking, kayaking or skiing the mountains, lochs and  coasts of Scotland and overseas.
Doug is a Director of the community company Carr-Bridge Ahead.

Merchandising  Coordinator- Lara Campbell
Lara is our longest serving team member and has been involved since the start of the event. She has fulfilled a number of roles on the team over the years.
Lara is recently employed by sponsor Landmark Forest Adventure Park having worked for many years in Hospitality. She is also a Director of Carrbridge Ahead.

Lara is usually behind the camera tho Lara and Margarete are pictured here with Gin and Prosecco cocktails and Paige – Selfie taken by Karen on Midsummer night 2019. Karen also volunteers on the day to do Face Painting and with the Event Press Releases which is of course the purpose of this meeting!!

Karen joined the team for the early planning stages in 2020.  She demonstrated her versatility when the event went online by producing a video of the popular Carrbridge Carving Trail . Karen is responsible for the onsite Food and Beverage offer.  She coordinates the Beer Tent team, the volunteers who refuel the Carvers and volunteers and ensure our visitors have a choice of refreshments from local suppliers and voluntary organisations.

Activities Coordinator – to be confirmed

yes they are lions

Stuart is a retired Mechanical Engineering consultant and has been a day volunteer at the Carve for a few years. He brings a wealth of experience to the event and manages a large team of volunteers who provide the ‘behind the scenes support’ that makes it all happen.  As long as there is a supply of bacon rolls, tea and coffee.

Publicity and Media Coordinator – Margarete Paschke
Margarete is a lecturer at the University of the Highlands and Islands.  She has been involved in the event for a number of years as a day volunteer. Her tasks include managing the website, social media for the event and press / media enquiries. Her IT skills were put to the test in 2020 when the event became ‘virtual’.  As a previous organiser of the Golden Spurtle World Porridge Championships, she recognises the importance of events in building community profile and community spirit.
Like Lara, Margarete is often behind the camera.