IT’S A HAT TRICK FOR GERMANY AT CARVE CARRBRIDGE 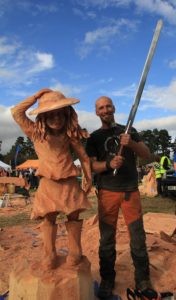 It might have been a disappointing World Cup campaign for Germany in 2018 but they have something to celebrate tonight with German chainsaw carver Michael Tamoszus blowing away the competition and achieving the ultimate hat trick at Carve Carrbridge.

With his captivating carving ‘Girl in the Wind’ which truly captured the movement of the elements, not only did the woodsman from the Black Forest win the coveted Claymore Trophy, he also won the ‘Peoples Choice’ and the ‘Carvers Choice’ titles. This was Michael’s sixth year as a competitor – having previously won ‘Best New Entrant’ in 2009.

Now in its 16th year, Carve Carrbridge attracts chainsaw sculptors from around the world and is the ultimate chainsaw carving competition, attracting some 3,500 spectators.

Carve Carrbridge organiser, Gavin Gerrard said: “There were horses, bears, bagpipers, warriors and even Oor Wullie – what an amazing array of chainsaw carving talent has been on display today and Michael is a very deserving winner of the Claymore Trophy, many congratulations to him. A very big thank you to all our sponsors and brilliant volunteers who make Carve Carrbridge such a success every year with all the money raised at the event going to good causes in the community.”