These carvings can be viewed from the footpath, please respect the privacy of the home owner who has kindly included them on our trail. 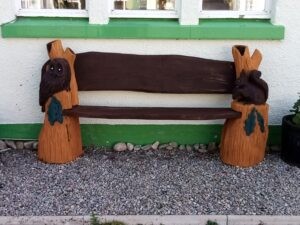 Iain also carved the Bench at the front of the house (which has been in place since about 2012) and the osprey was carved by local artist Alice Buttress. Its been around since 2009″

“The village police station and its adjoining house were built in 1950 .
The house became empty in the 1990s with the retiral of the local bobby but the police station remained in service until 2001.

They were bought by the present owners in 2006 and merged into a single dwelling.