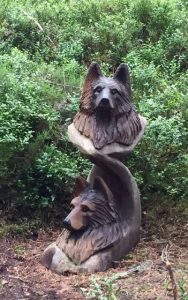 Community Woodland. These were carved at Cairngorm Nature event   2011 by Iain Chalmers and were donated to the Woodland Trust to be sited in Glenchanroch Woods

In Scotland, official records indicate that the last Scottish wolf was killed in 1680 in Killiecrankie (Perthshire), but there are reports that wolves survived in Scotland up until the 18th century, and a may even have been seen as late as 1888.

Scientists back reintroducing Wolves to Scotland to encourage Biodiversity