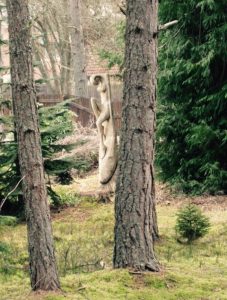 Contemplation ( female figure) closest to the driveway was carved by Dunoon based carver Andy McLachlan in 2009 from Sitka spruce. 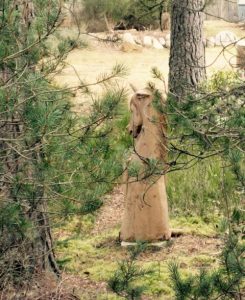 The Unicorn Unchained was carved by Nansi Hemmings of Wales in 2014, the week before the referendum on Scottish Independence

The unicorn is a mythological animal and the appears on the coat of arms of the United Kingdom. However in that context the unicorn is changed as it is considered to be wild beast that must be tamed.

In 2018 the Wizard under the pine tree in the far raised bed, joined the collection. 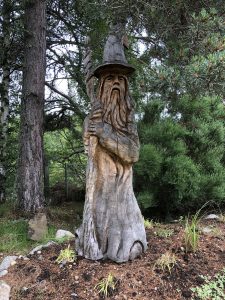 Carved by Cheshire based carver Andy Burgess he is a friendly character……. 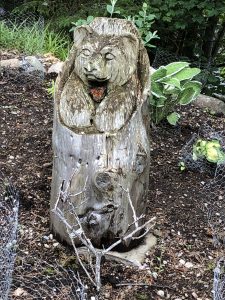 So all we need is a carving by an Irish female carver to complete the Battanropie team.

Our first Carving was a small bear coming out of a log carved by Brett McLean of the USA in 2006. Like every old teddy he is much loved despite being a bit worn.

Battanropie House was built in 1910 we know a little of its history back to the late 1930’s. The original property included the land on which Battanropie Lodge and The Broch are now built.